Back in 2010, I submitted a proposal to the Knight News Challenge to fund the Seward Profile site. I made it through the initial weeding and held on almost to the final announcement but didn’t get the money in the end.

I’m doing it again. This time, it’s not the Profile site. I’ve come up with an idea to bridge the digital divide in our neighborhood via SMS (texting). The 2012 Knight News Challenge (KNC) is on a fast track compared to previous years. Submit a 450 word proposal by midnight, March 17 (tomorrow!), finalists to be announced April 2, and winners to be announced June 18. The proposal is to use Twitter and system.net (ident.ca) to broadcast native language tweets via SMS. Participants in the system will attend a workshop where they will learn how to join Twitter or system.net and subscribe and configure a feed via SMS to their cell phone in their preferred language. Creating the tweeting account could be done at the workshop with no further direct access to the tweet account meaning no one needs to have internet access at home. Initial language translations would be in Somali and Amharic (spoken by the Oromo). Translators would be hired to translate and send out the tweets. I envision three feeds: English, Somali, and Amharic. Seward Neighborhood Group supports the proposal and will contribute some administrative time to the project if funded. Here’s some data from Pew that shows that lower-income, minorities, and less-educated are using SMS extensively. 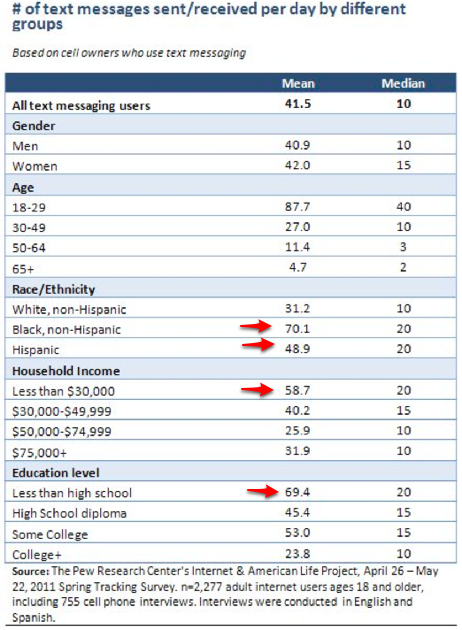 My full proposal is below and I would love constructive criticism and/or feedback. I do realize it’s an 11th hour request so anything will be welcome. Even more important, Is anyone doing anything like this? Please link me!

I’ll send out a link to the final proposal at the KNC site. It’s all in the Tumblr system so you can like and reblog. The top 5 submissions in terms of likes/reblogs will become semi-finalists. Knight News Challenge Entries at Tumblr Knight Proposal
These are the questions and word restrictions from the proposal. It’s short and sweet but only a foot in the door if accepted. An interview and detailed budget will follow if this one is accepted. 1. What do you propose to do? [20 words] Provide meeting and event announcements for Seward Neighborhood in Minneapolis, MN using Twitter, status.net, and SMS and incorporating native languages for immigrant populations.

2. Is anyone doing something like this now and how is your project different? [30 words] Many projects have messaging systems using Twitter and other social media tools for providing neighborhood information but none that I’m aware of integrate with SMS and translate to native languages. 3. Describe the network with which you intend to build or work. [50 words] Social network tools Status.net, identi.ca, and Twitter.com. Both Status.net and identi.ca are open source and both integrate completely with Twitter to create a very flexible overall system. 4. Why will it work? [100 words] The project directly addresses digital divide issues by using SMS to route around the internet and provide access to underserved communities that are engaged in texting. It acknowledges that for some it will be easier to read the information in their first language rather than English. With this project, we hope to increase community engagement. 5. Who is working on it? [100 words] Peter Fleck is the project lead. The Seward Neighborhood Group, major representative to the City of Minneapolis for the neighborhood, is chief sponsor and will provide administrative support. Redesign, Inc. the neighborhood community development corporation, also supports the project. Translators will be hired under contract as the project progresses and the software is built. 6. What part of the project have you already built? [100 words] The English content is in place via the neighborhood’s established Twitter feed (@sewardtweets, 367 followers) curated by Peter Fleck. The Twitter account has been in place since 2009. The neighborhood also uses other social media and blogging tools that will enhance this project including the neighborhood Facebook account (facebook.com/sewardneighborhood), a news and events blog (sewardprofile.posterous.com), and a neighborhood calendar (bit.ly/sewardcal). 7. How would you sustain the project after the funding expires? [50 words] The neighborhood group will seek City of Minneapolis community participation funds for continued funding and a Kickstarter initiative will be attempted. We also hope to develop a subscription service to allow other neighborhoods to tap the work we are doing.
Advertisement

1 thought on “My proposal for the Knight News Challenge 2012! Please read and comment.”